‘We Failed To Act’: Joe Biden Slam by Critics For Failure On Afghan Evacuations

“To be quite candid, this situation absolutely could have and should have been avoided,” said one refugee group. 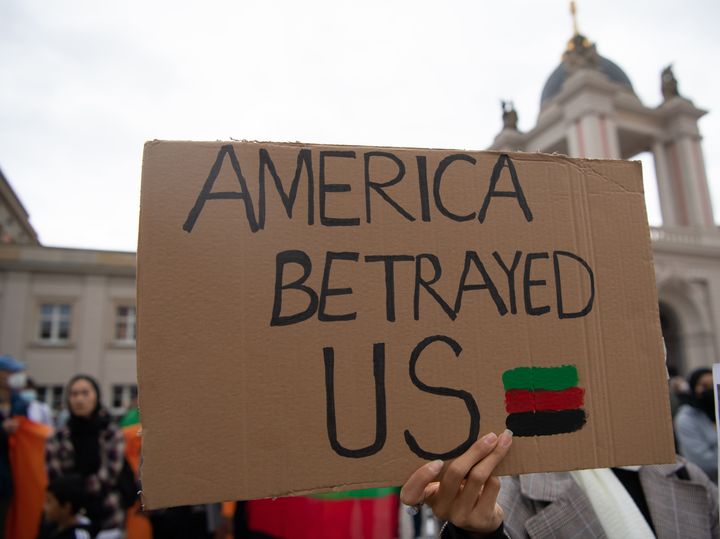 Refugee groups and  Democrats are blasting President Joe Biden’s administration for its handling of evacuations from Afghanistan, and for not moving more quickly to help refugees and other vulnerable groups as Taliban takeover seemed imminent.

Afghanistan’s capital, Kabul, plunged into chaos this week as the Taliban seized control of the city. The last American troops were set to leave the country in the coming weeks, in what was supposed to be the end of a 20-year war.  Disturbing photos circulated online Monday show Afghan civilians and families clinging to a U.S. military plane as it took off, with some falling to their deaths. Another image showed more than 600 Afghans packed on a flight to the U.S.

“We appreciate the efforts the administration is undertaking to ensure the safety and security of those currently in Afghanistan but our government needs to go farther and work faster,” Rep. Pramila Jayapal (D-Wash.), the chair of the Congressional Progressive Caucus, said Tuesday in a statement. “The United States must ensure refugee processing moves forward without bureaucratic delay, and with special allowances recognizing the difficulty for people to leave Afghanistan.”

Jayapal also called for the State Department to expedite Special Immigrant Visas, expand Temporary Protected Status ― a short-term designation given to eligible nationals from countries affected by armed conflict or natural disaster ― and increase humanitarian aid for civilians who fled and are without shelter, food and medicine.

There are currently more than 17,000 Afghan nationals — as well as an estimated 53,000 of their family members — awaiting visa approval through the Special Immigrant Visas (SIV) program, which allows people who worked as translators and interpreters for the U.S. military or NATO in Iraq and Afghanistan to come to the U.S.

A backlog has long plagued the program, and the average processing time per visa is 800 days. Many applicants have waited years for their visas. In the months prior to withdrawing troops, Democrats and refugee groups alike have called on the Biden administration to act faster to prevent the kind of chaos currently unfolding in Afghanistan.

More than 700 SIV applicants have been evacuated from Afghanistan in the past 48 hours, Department of Defense official Army Maj. Gen. Hank Taylor said Monday in a press briefing. A total of about 2,000 of these applicant are now in the U.S.

A State Department spokesperson said that the agency continues “to pursue all options to relocate interested and qualified Afghan SIV applicants and their immediate families, as well as vulnerable Afghans.”

No matter your feelings on the war, the undeniable truth is that we had both the means and the time to save those in danger, and yet, we neglected to act in any meaningful way.Krish O’Mara Vignarajah, president of the Lutheran Immigration and Refugee Service

Many have said those numbers are just a small fraction of those who urgently need to get out of Afghanistan. Refugee groups are frustrated with the lack of transparency coming from government officials.

“To be quite candid, this situation absolutely could have and should have been avoided,” said Krish O’Mara Vignarajah, the president and CEO of the Lutheran Immigration and Refugee Service (LIRS). “We had been advocating for a full-scale evacuation of our allies and their families for months now. It was clear to anyone with passing familiarity of the bureaucratic maze that is the Special Immigrant Visa process, it wasn’t going to be agile enough to respond to the need.”

“We fought side by side for 20 years — surely, we can leave side by side,” she said. “No matter your feelings on the war, the undeniable truth is that we had both the means and the time to save those in danger, and yet, we neglected to act in any meaningful way.”

Lutheran Social Services has since put out a call for volunteers in the D.C. area to assist with resettlement efforts, including providing transportation, home furnishings and financial contributions to arriving families.

Pentagon officials said thousands of refugees could potentially arrive in states such as Texas and Wisconsin in the coming weeks.

Mark Finney, the executive director at the nonprofit group World Relief Spokane, flew across the country to Virginia over the weekend to help process SIV applications. But he said it’s not clear how many refugees are actually expected to arrive immediately.

“We were anticipating that starting yesterday, there would be at least one flight a day, with several 100 people on each flight directly from Afghanistan,” Finney said. “We’re hoping that flights can resume, but there’s a lot of uncertainty.”

A bipartisan group of senators on Tuesday wrote a public letter to Secretary of State Antony Blinken and Homeland Security Secretary Alejandro Mayorkas, urging them to create a humanitarian parole category specifically for women leaders, human rights activists, journalists and other vulnerable Afghans, which would allow for faster relocation to the U.S.

“We and our staff are receiving regular reports regarding the targeting, threatening, kidnapping, torturing, and assassinations of women for their work defending and promoting democracy, equality, higher education, and human rights,” said the letter.

Biden  doubled down on his decision to withdraw troops in a speech on Monday, although he acknowledged that the Taliban takeover “did unfold more quickly than we had anticipated.”

“The past couple of days has been really concerning and very frustrating for us ― frustrating in the sense that there’s a lot of rapid movements that we need to be planning for,” said Manoj Govindaiah, the director of policy and government affairs at the Refugee and Immigrant Center for Educational and Legal Services (RAICES), which has resettled more than 600 Afghan refugees since 2017.

Govindaiah criticized the current and previous administration for not prioritizing the most vulnerable populations in a timely fashion. Asylum-seekers, refugees and other groups of Afghan civilians — not just people applying for SIVs — are in dangerous situations.

“We really need to be looking much more long-term and looking at legislation that can attempt to address this crisis that the United States very much contributed to, if not caused outright,” Govindaiah said.

Clubhouse Android app is expected to release this…