The reigning World Cup champs still have a chance for a bronze medal. 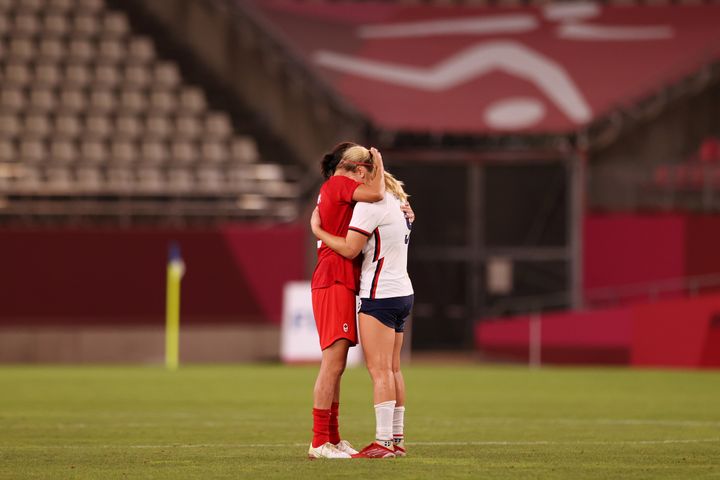 No gold or even silver for you, U.S. women’s national soccer team.

The world’s top-ranked squad lost Monday to No. 8 Canada, 1-0, in a Tokyo Olympics semifinal that left the Americans far short of expectations.

After a foul by Tierna Davidson of the U.S., Jessie Fleming of Canada scored the match’s lone goal in the 75th minute on a penalty kick that got past goalkeeper Adrianna Franch, who subbed in for an injured Alyssa Naeher during the first half.

Canada converts the penalty to take the lead. #TokyoOlympics pic.twitter.com/r856yMXjIb

In one of the Americans’ last gasps, Carli Loyd headed a ball against the bar in the 86th minute.

Lloyd was part of a wave of veteran substitutions late in the 60th minute that also included Megan Rapinoe and Christen Press. But to no avail.

The last time the two teams played each other in the Olympics was in a London 2012 semifinal, when the U.S. won in a 4-3 nail-biter. The American team would go on to capture the gold, its last in the Summer Games and the last time it medaled. It got booted by Sweden in the Rio 2016 quarterfinals.

This squad was attempting to become the first team to secure an Olympic gold as the defending World Cup champs.

Canada was expected by some to be an easier mark than the fourth-ranked Dutch, who were dispatched by the Americans on penalty kicks in the Tokyo Olympics quarterfinal.

The U.S. still has a chance for bronze against Australia in a Thursday match. The two teams played to a scoreless tie in the group stage.

Biden Says ‘Nothing Will Get Done’ If Senate Abolishes Filibuster