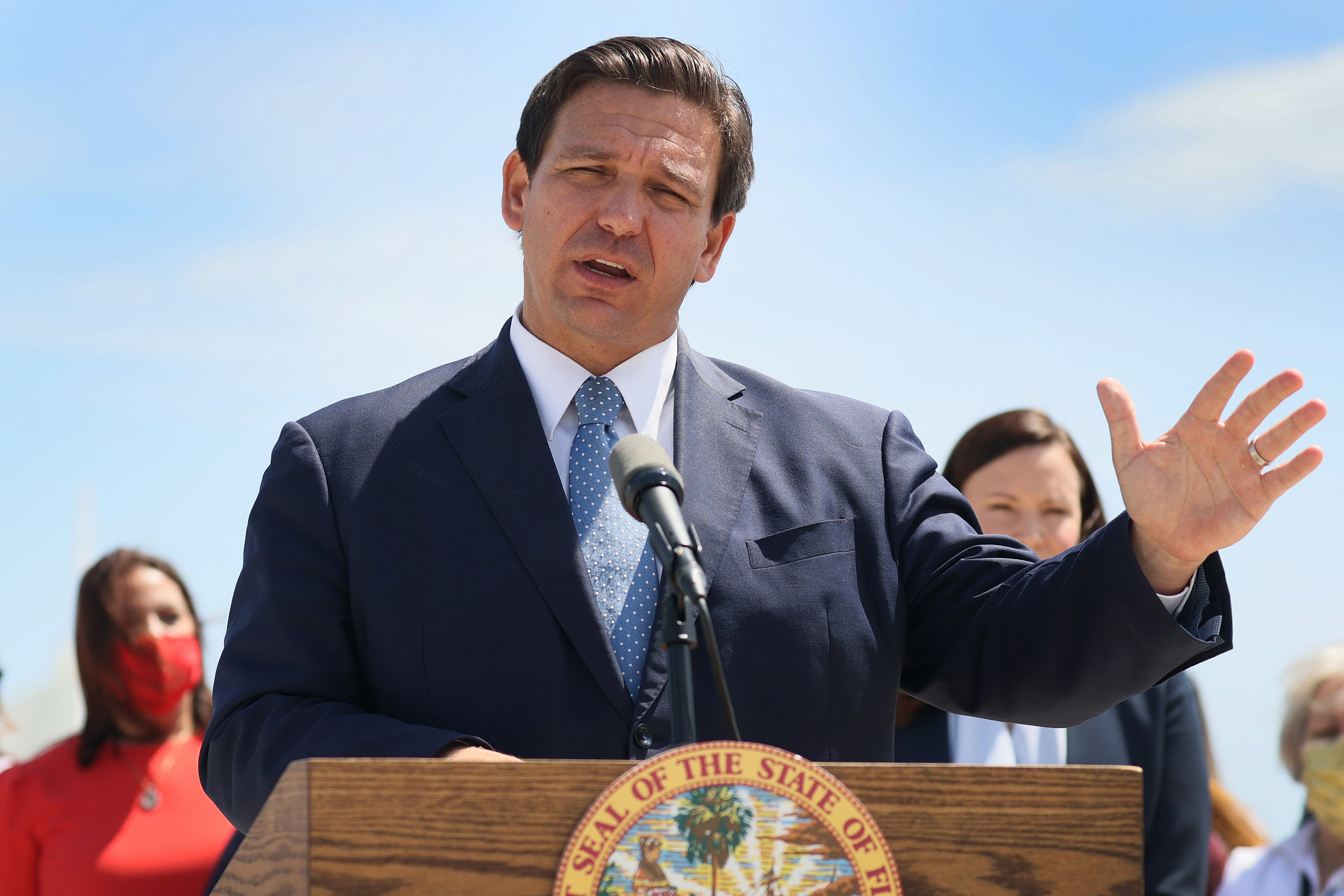 Florida’s state Senate has passed a bill that includes a number of voter suppression initiatives, following Georgia’s lead in chipping away at voting rights.

Senators in the GOP-led chamber voted 23-17 to pass S.B. 90 on Monday, which is Confederate Memorial Day in the state. The Florida House, which is also led by the GOP, is expected to pass a similar bill later this week, despite concerns from Democrats and voting rights activists that the legislation is part of a nationwide Republican effort to restrict the constitutional right to vote.

The Florida Senate bill criminalizes giving food and water to voters in line, severely restricts where ballot drop boxes can be placed, and limits who can collect and drop off ballots. It also requires voters to first show identification to an election official before casting their ballot, mandates that voters request an absentee ballot for every election, and empowers partisan poll-watchers during the ballot-counting process.

Voters who have moved within the state must also fill out an additional voter registration form by paper or online, replacing the current process of calling or emailing a county elections supervisor.

“Florida just passed SB 90, creating more barriers for our most precious right to the democratic process, voting,” tweeted Democratic state Sen. Shevrin Jones. “Between Georgia and Florida, I really need to go check to see if we ever left the Jim Crow era, because there’s a lot of goal post moving happening.”

Republican Gov. Ron DeSantis is expected to sign a final bill into law after promising his signature on any voter suppression bill that lands on his desk. Florida Secretary of State Laurel Lee, also a Republican, is the state’s chief elections officer and has not commented on S.B. 90.

A group called the Democratic Association of Secretaries of State has worked to defend the integrity of the 2020 elections in swing states, and is now focused on protecting voting rights in response to Republicans’ effort to curb them.

“As Democratic Secretaries of State, we believe in ensuring every eligible American access to vote regardless of where they live, rather than allowing elected officials to choose their voters,” said Colorado secretary of state Jena Griswold, the group’s chair.

DeSantis and the state’s Republican legislators “have aimed an arrow at the heart of democracy in Florida both in the ability to peacefully protest politicians’ actions and in accessing the ballot box to fire those politicians,” Carry Boyd, Florida policy counsel for the SPLC Action Fund, said in a statement.

Republicans have been introducing hundreds of bills threatening to restrict voting access in dozens of states. A tally by New York University’s Brennan Center for Justice counted 361 bills with anti-voting provisions in 47 states as of March 24.

Georgia made headlines in March for passing an extremely restrictive voting bill that critics have called “Jim Crow 2.0” due to its disproportionate impact on Black, brown, low-income, older and disabled Georgians. Montana’s GOP Gov. Greg Gianforte signed a law ending same-day voter registration and removing student IDs from a list of acceptable identifications. Republicans in Michigan, Texas, Arizona, Arkansas, Iowa and Utah, among other states, are also advancing similar legislation to restrict voter access and give election administration powers to partisan legislatures.

“I think the bottom-line question we are addressing in this hearing is whether there is a design or intent in legislation that is being considered and passed in many states … to limit or restrict the right to vote of minority populations, with the intent of influence on the outcome of an election,” U.S. Senate Judiciary Committee Chair Dick Durbin (D-Ill.) said during an April 20 hearing on the voter suppression bills.

Republicans have falsely alleged that the bills are efforts to prevent fraud and restore trust in elections following Democratic President Joe Biden’s victory and two Senate runoffs in Georgia that handed wins to Democrats. Claims that the 2020 election was fraudulent ― especially in cities and suburbs with a substantial Black population ― are lies, with former President Donald Trump’s own officials concluding that it was the most secure election in U.S. history.

The election also saw record voter turnout ― especially among people of color ― thanks to expanded access to voting and initiatives like ballot drop boxes. That turnout ended up flipping some Republican states blue when it came to the presidential race, including Georgia.

Trump and DeSantis had both previously used and praised mail-in voting, but the Florida governor changed his position after more Democrats than Republicans voted by mail for the first time in his state.

Congress is currently debating the passage of the For the People Act, a sweeping bill that would reform the country’s voting rights, campaign finance, redistricting and ethics. The bill would attempt to reverse Republicans’ efforts to restrict the vote by mandating no-excuse absentee voting and same-day registration, among other initiatives.

The House passed H.R. 1 on March 3, and the Senate will consider it now that Democrats have slim control of the chamber ― however, the bill requires at least 60 votes unless senators change the filibuster.

Here Are The Key Moments From Biden’s Speech To Congress

Hostility between congressional Republicans and…

The House Impeachment Managers Have Already…