Police say Christian Emmanuel Sanon was in contact with a firm that recruited the suspects in the killing. 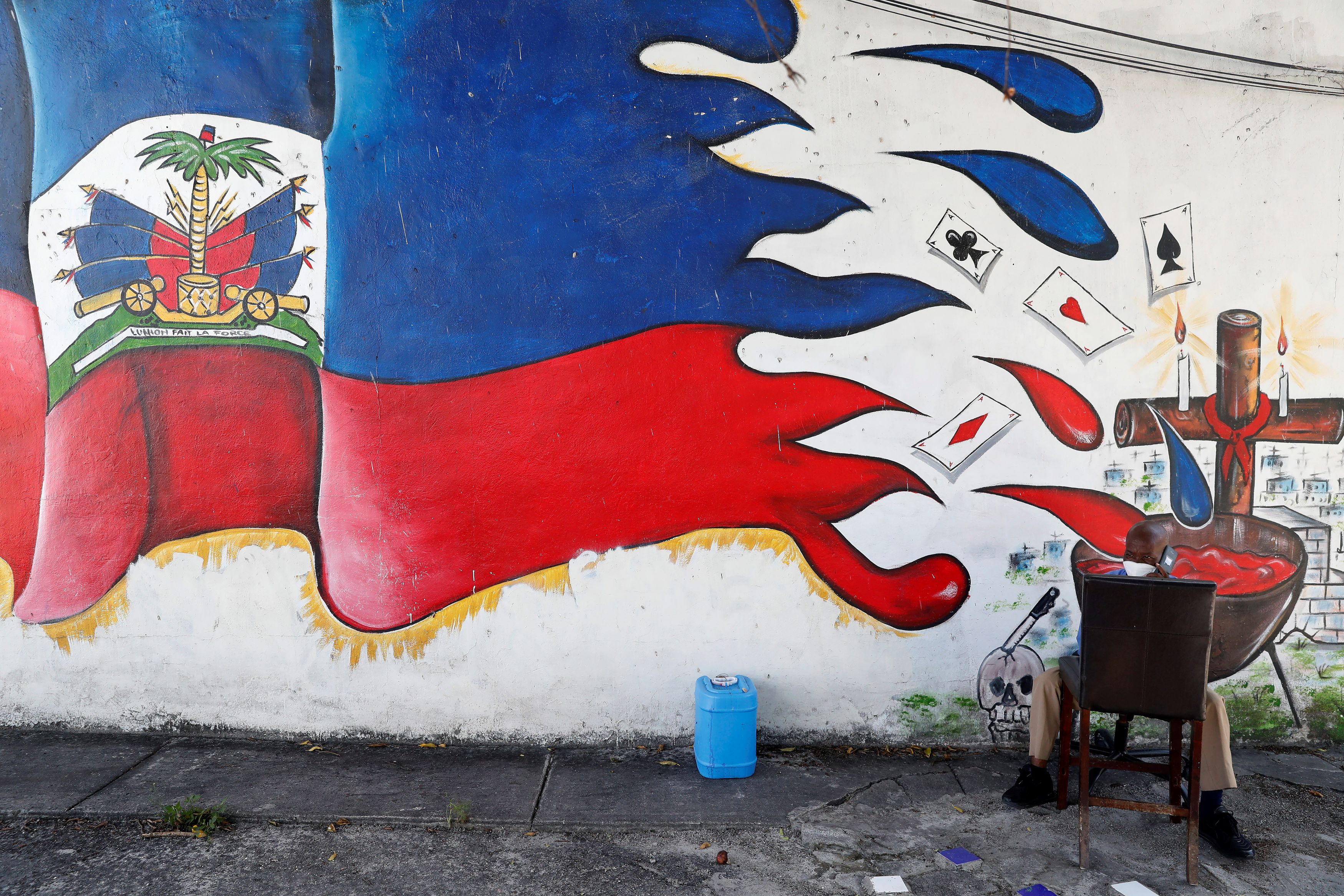 PORT-AU-PRINCE, Haiti (AP) — The arrest of a failed Haitian businessman living in Florida who authorities say was a key player in the killing of Haiti’s president deepened the mystery Monday into an already convoluted plot surrounding the assassination.

Haitian authorities identified the suspect as Christian Emmanuel Sanon, 62, who once expressed a desire to lead his country in a YouTube video. However, he is unknown in Haitian political circles, and associates suggested he was duped by those really behind the assassination of President Jovenel Moïse in an attack last week that critically wounded his wife, Martine, who remains hospitalized in Miami.

A Florida friend of Sanon told The Associated Press that the suspect is an evangelical Christian pastor and a licensed physician in Haiti, but not in the U.S. The associate, who spoke on condition of anonymity out of safety concerns, said Sanon told him he was approached by people claiming to represent the U.S. State and Justice departments who wanted to install him as president.

He said the plan was for Moïse to be arrested, not killed, and Sanon would not have participated if he knew Moïse would be assassinated.

“I guarantee you that,” the associate said. “This was supposed to be a mission to save Haiti from hell, with support from the U.S. government.”

Echoing those sentiments was the Rev. Larry Caldwell, a Florida pastor, who said he worked with Sanon setting up churches and medical clinics in Haiti from 2000-2010. He doesn’t believe Sanon would have been involved in violence.

“I know the character of the man,” Caldwell said. “You take a man like that and you’re then going to say he participated in a brutal crime of murder, knowing that being associated with that would send him to the pits of hell? … If there was one man who would be willing to stand in the breach to help his country, it would be Christian.”

Haiti’s National Police chief, Léon Charles, said Moïse’s killers were protecting Sanon, whom he accused of working with those who plotted the assassination.

Charles said officers found a hat with the logo of the U.S. Drug Enforcement Administration, 20 boxes of bullets, gun parts, four license plates from the Dominican Republic, two cars and correspondence, among other things, in Sanon’s house in Haiti.

Twenty-six former Colombian soldiers are suspected in the killing and 23 have been arrested, along with three Haitians. Charles said five suspects are still at large and at least three have been killed.

A U.S. Drug Enforcement Administration official told AP that one of the suspects in Moïse’s assassination was at times a confidential source to the agency, and that the suspect reached out to his contacts at the DEA after the killing and was urged to surrender. The official said the DEA and a U.S. State Department official provided information to Haiti’s government that led to the surrender and arrest of one suspect and one other individual, whom it didn’t identify.

Meanwhile, Colombia’s national police chief, Gen. Jorge Luis Vargas, said that a Florida-based enterprise, CTU Security, used its company credit card to buy 19 plane tickets from Bogota to Santo Domingo for the Colombian suspects. Most arrived in the Dominican Republic in June and moved into Haiti within weeks, Vargas said.

He said that Dimitri Hérard, head of general security at Haiti’s National Palace, flew to Colombia, Ecuador and Panama in the months before the assassination, and Colombian police are investigating whether he had any role in recruiting the mercenaries. In Haiti, prosecutors are seeking to interrogate Hérard over the assassination.

Charles said Sanon was in contact with CTU Security and that the company recruited the suspects in the killing. He said Sanon flew into Haiti in June on a private jet accompanied by several of the alleged gunmen.

The suspects’ initial mission was to protect Sanon, but they later received a new order: to arrest the president, Charles said.

“The operation started from there,” he said, adding that 22 additional suspects joined the group.

Charles said that after Moïse was killed, one suspect phoned Sanon, who got in touch with two people believed to be masterminds of the plot. He did not identify them or say if police know who they are.

Sanon’s associate said he attended a recent meeting in Florida with Sanon and about a dozen other people, including Antonio Enmanuel Intriago Valera, a Venezuelan émigré to Miami who runs CTU Security. He said a presentation was made for rebuilding the country, including its water system, converting trash into energy and fixing roads.

He said Sanon asked why the security team accompanying him to Haiti were all Colombians. Sanon was told Haitians couldn’t be trusted and that the system is corrupt, the associate said. He said Sanon called him from Haiti a few days before the assassination and said the Colombians had disappeared.

“I’m all by myself. Who are these people? I don’t know what they are doing,” the associate quoted Sanon as saying.

Sanon “is completely gullible,” the associate added. “He thinks God is going to save everything.”

Sanon has lived in Broward County in Florida, as well as in Hillsborough County on the Gulf Coast. Records also show he resided in Kansas City, Missouri. He filed for bankruptcy in Florida in 2013 and identified himself as a medical doctor in a video on YouTube titled “Leadership for Haiti.”

However, records show Sanon has never been licensed to practice medicine or any other occupation covered by Florida’s Department of Health.

Sanon said in court papers filed in a 2013 bankruptcy case in Florida that he was a physician and a pastor at the Tabarre Evangelical Tabernacle in Haiti. He said he had stakes in enterprises including the Organization of Rome Haiti, which he identified as a non-governmental organization, a radio station in Haiti and medical facilities in Haiti and the Dominican Republic.

At the time of his bankruptcy, he and his wife reported income of $5,000 per month, and a home in Brandon, Florida, valued at about $143,000, with a mortgage of more than $367,000. A federal bankruptcy trustee later determined they hid ownership of about 35 acres in Haiti from creditors.

Florida records show Sanon started about a dozen businesses over the last 20 years, all of which failed, including ones that appeared related to medical imaging, physical therapy, fossil fuel trading, real estate and veganism.

He falsely claimed that Haiti has uranium, oil and other resources that have been taken by government officials.

“Nine million people can’t be in poverty when we have so much resources in the country. It’s impossible,” he said. “We need new leadership that will change the way of life.”

Sanon’s arrest comes as a growing number of politicians have challenged interim Prime Minister Claude Joseph, who is currently in charge of Haiti with backing from police and the military.

U.S. officials, including representatives from the U.S. Department of Justice and the Department of Homeland Security, met Sunday with Joseph, designated Prime Minister Ariel Henry and Joseph Lambert, the head of Haiti’s dismantled Senate, whom supporters have named as provisional president in a challenge to Joseph, according to the White House National Security Council.

The delegation also met with Haiti’s National Police and reviewed the security of critical infrastructure, it said.

“What was clear from their trip is that there is a lack of clarity about the future of political leadership,” Psaki said.

U.S. President Joe Biden said he was closely following developments, adding: “The people of Haiti deserve peace and security, and Haiti’s political leaders need to come together for the good of their country.”

The United Nations has been involved in Haiti on and off since 1990, but the last U.N. military peacekeepers left the country in 2017.

Delta strain All in L.A county To Require Masks indoors as COVID-19 Surges

Why the hair scarf will be your go-to summer…

What to Know About National Park Fees for 2018