Democrats Are Slowly Getting More Critical Of Israel 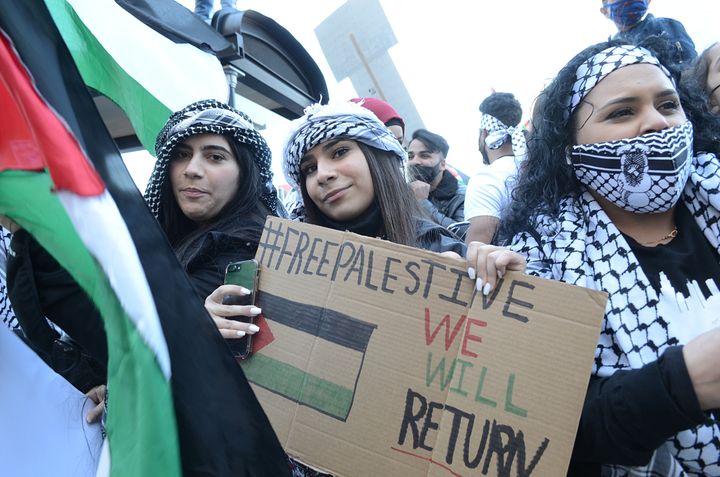 As Israel bombarded the Gaza Strip in response to rockets fired by the Palestinian militant group Hamas on Thursday night, Rep. Rashida Tlaib, a Detroit Democrat and Congress’ only Palestinian American, delivered a tearful appeal on the House floor for solidarity with Palestinians living under Israeli military occupation.

“Help me understand the math: How many Palestinians have to die for their lives to matter?” Tlaib asked while wearing a traditional Palestinian “keffiyeh” scarf around her neck. “Life under apartheid strips Palestinians of human dignity.”

This group of 11 lawmakers ― Rep. Marie Newman (Ill.) also co-sponsored the speeches in absentia ― made a point, at times, of objecting to Palestinian militant groups’ targeting of Israeli civilians.

But their chief diversion from traditionally bipartisan, pro-Israel orthodoxy was that the United States must use its power as Israel’s chief benefactor to stop, to the extent possible, disproportionate retaliation by Israeli forces and encourage an end to the ethnocratic occupation of territory captured in 1967. Omar, never one to mince words, dubbed Israeli Prime Minister Benjamin Netanyahu a “far right ethno-nationalist.”

The pro-Palestinian speeches ― and a series of other statements, bills and other efforts to shape policy ― reflect a growing sympathy for the Palestinian cause among Americans in general, and Democrats in particular, that is finally manifesting on Capitol Hill.

The changes are not yet transformative. Proponents of unconditional support for Israeli government policy continue to call the shots. The prospect of a U.S. president or Congress willing to even threaten the withholding of the financial or diplomatic aid to Israel in the interest of curbing the growth of settlement in the occupied Palestinian territories, or other practices that violate international law, remains a dim fantasy.

But there is a growing bloc of pro-Palestinian dissenters in Congress that marks a tidal shift from just a few years ago, advocates for Palestinian freedom say.

“There is a far stronger cohort of Democrats in the House and the Senate making statements that have not been made in the past. And that’s noticeable,” said James Zogby, founder and president of the Arab American Institute. “It’s reflective of the shifting demographics within the party, and shifting attitudes within the party.”

Perhaps no lawmaker more embodies that shift than Sen. Elizabeth Warren (D-Mass.). In Aug. 2014, Warren shocked many progressives with her impassioned defense of Israeli bombardments of Gaza, including the targeting of schools and hospitals, on the grounds that Palestinian militants used those sites to launch attacks. The position put her to the right of then-President Barack Obama’s administration, which said it was “appalled” by the Israeli bombing of a United Nations school in Gaza.

Warren also expressed skepticism of the idea of imposing tougher conditions on U.S. aid to Israel to get it to change its policies.

Nearly seven years later, Warren has undergone an about-face. In late April, she expressed openness to restricting military aid to Israel as a way to bring about a two-state solution, calling it “irresponsible not to consider all of the tools we have at our disposal.” A few weeks later, she was one of just a handful of members of Congress to forthrightly condemn the Israeli government’s expulsion of Palestinian families from their homes in the East Jerusalem neighborhood of Sheikh Jarrah.

Meanwhile, in Congress, efforts to condition aid to Israel are picking up steam, however modestly. Newman, a freshman progressive lawmaker who ousted a more conservative Democrat with help from Chicago’s Arab American and Muslim community, spearheaded a letter with 24 co-signers calling for Biden to pressure Israel to halt the evictions in Sheikh Jarrah that helped set off the current round of violence. (More than 100 prominent progressive groups organized by human rights attorney Yasmine Taeb have sent a similar letter to Biden.)

And McCollum has once again introduced a bill that would “ensure that United States taxpayer funds are not used by the Government of Israel to support the military detention of Palestinian children, the unlawful seizure, appropriation, and destruction of Palestinian property and forcible transfer of civilians in the West Bank, or further annexation of Palestinian land in violation of international law.” The bill has 19 co-sponsors; Rep. Jared Huffman (D-Calif.) signed on to it on Wednesday.

In late April, about three-quarters of the House, including a majority of Democrats, signed a letter promoted by the American-Israel Public Affairs Committee (AIPAC) reiterating their belief that the United States’ annual $3.8-billion aid to Israel should remain unconditional.

Still, some pro-Palestinian advocates took heart in the fact that more than 75 Democrats refused to sign the letter, which likely would not have been the case in the past.

And in light of recent events, Zogby ventured, “You would not get that same number of signatures on that AIPAC sign-on letter today.”

Progressive Middle East experts believe that a number of factors explain the small but growing faction of unabashed Israel critics in Congress.

If it weren’t for young, Jewish progressives … we would be in a very different place right now.James Zogby, Arab American Institute

Perhaps the biggest reason is the dramatic rightward shift of Israeli politics under the 12-year premiership of Prime Minister Benjamin Netanyahu.

Netanyahu’s disavowal of a two-state solution and efforts to capitalize on racism toward the country’s minority of Arab citizens during a 2015 reelection campaign prompted criticism from some Democratic lawmakers. The prime minister’s decision, a few months later, to thumb his nose at Obama by delivering a speech to Congress opposing the Iran nuclear agreement in 2015 was a key turning point that bothers many Democrats to this day.

And Netanyahu’s strong partnership with President Donald Trump only cemented his status as a right-wing bogeyman whom liberals could feel comfortable denouncing as “racist” without fear of major political blowback.

What’s more, Netanyahu’s hold on power reflects a broader reactionary turn in Israeli politics that makes it harder for the Israeli government to sell Americans on the country’s status as an LGBTQ- and vegan-friendly oasis of liberalism.

For example, in 1988, the Israeli Knesset banned the political party of far-right extremist Rabbi Meir Kahane based on an Israeli law prohibiting explicitly racist parties.

Now some of Kahane’s followers not only hold seats in the Knesset but are poised to serve in Netanyahu’s next governing coalition. Young Jewish supremacists aligned with Kahane were also leading the charge to expel Palestinians in Sheikh Jarrah and later to terrorize Palestinian citizens in cities near Tel Aviv.

“The face of Israeli politics has become increasingly, brazenly racist,” said Yousef Munayyer, a Palestinian activist in Washington who was born in the ethnically mixed Israeli city of Lod. “The whole Israeli political spectrum is dominated by the right now.”

The changing political winds in Israel have made it easier for the American public to see what many Palestinians say was the reality all along: That Israel’s occupation of the Palestinian territories and discrimination against Arab citizens contradict American values of freedom, equality and individual rights regardless of race and background.

Since so much of the Israeli government’s argument relies on painting the two nations’ bond as emerging from a shared set of liberal, democratic values, the deterioration of Israel’s image as a liberal bastion has had political consequences.

“The myth of shared values is coming to an end,” Munayyer said.

At the same time, a nascent left wing in America energized in recent years by the presidential candidacy of Sen. Bernie Sanders (I-Vt.) and the Black Lives Matter movement has mobilized to show that pro-Palestinian voters are also a constituency capable of wielding influence.

In particular, the emergence of a vocal and organized community of Jewish Israel critics, ranging from the moderate group J Street to more radical factions, like IfNotNow and Jewish Voices for Peace, has created space for Arab Americans and other non-Jews to criticize the Israeli government with less fear of being brand an antisemite, according to Zogby.

“If it weren’t for young, Jewish progressives … we would be in a very different place right now,” Zogby said.

Sanders, a secular Jew who spent time on an Israeli kibbutz as a young man, has spoken with equal passion about his pride in being Jewish and his support for Palestinian rights and statehood. He surprised many observers with his pointed criticism of the Israeli government during a presidential primary debate with Hillary Clinton in Brooklyn in 2016, and remains one of Congress’ leading voices for a more even-handed U.S. approach in the region.

Of course, the Democrats whose views on Israel-Palestine matter most remain much more conservative.

And before the pro-Palestinian group of Democrats spoke on the House floor on Thursday, a different bloc of more moderate Democrats delivered speeches fiercely defending Israel’s conduct.

There are signs of wavering confidence in the pro-Israel wing of the party, however.

Playing its usual role as a diplomatic shield for Israel, the U.S. government has sought to block a United Nations security council statement on the escalating violence in Israel and Gaza. Under pressure, it nonetheless agreed to a security council meeting about the conflict this Sunday.

And on Monday, State Department spokesperson Ned Price appeared flustered when asked to defend the Israeli military’s killing of Palestinian children in airstrikes.

“I understand we don’t have independent confirmation of facts on the ground yet, so I’m very hesitant to get into reports that are just emerging,” he replied with evident discomfort. “Obviously, the deaths of civilians, be they Israeli or Palestinians, are something we would take very seriously.”

Right-leaning pro-Israel advocates have correctly identified bipartisan support for Israel as a key bulwark against tighter conditions on U.S. aid to Israel and other deviations from the blanket-level U.S. support that these advocates see as essential to Israel’s security.

Faced with the prospect of more strident Israel critics gaining even a toehold within the Democratic Party, pro-Israel donors across the country have scrambled to intervene against left-leaning Democrats in several pivotal primary elections.

While Sanders ended up losing ― for other reasons entirely ― these right-leaning pro-Israel groups have had a number of high-profile defeats in other races. DMFI’s largesse failed to keep then-House Foreign Affairs Committee Chairman Eliot Engel from losing to Israel critic Jamaal Bowman in New York’s Democratic primary last June, notwithstanding the district’s large and active Jewish community.

And pro-Israel attorney Antone Melton-Meaux failed to unseat Omar in Minnesota’s Democratic primary in August despite an infusion of cash from pro-Israel political action committees.

Turner enjoys a major fundraising advantage, but DMFI’s status as a super PAC not subject to ordinary campaign fundraising limits could help balance the scales.