The virus has recently claimed a life every eight minutes in Los Angeles County, as California and Arizona confront a growing caseload. A team from the World Health Organization arrived in China to study the source of the pandemic.

Arizona has recorded the highest number of new coronavirus cases per capita in the country. A medical official said the hospital systems are under “immense pressure” to keep up with the amount of Covid-19 patients.

Deaths from the coronavirus are skyrocketing in the United States, reaching levels never before seen, largely fueled by relentless surges in California and Arizona.

As the national death toll nears 400,000, weekly deaths in Maricopa County, Ariz., and in Los Angeles and Fresno Counties in California have reached new highs.

The virus has been raging for weeks in California — especially in Los Angeles County, where Covid-19 has claimed one life about every eight minutes — although state officials said on Wednesday that they were seeing some encouraging signs.

In Arizona over the past week, state officials have recorded the highest number of new coronavirus cases per capita in the country.

Dr. Marjorie Bessel, chief clinical officer for the Banner Health hospitals in Arizona, warned on Wednesday that unless elected leaders and residents did more to stop the spread of the virus, five large health systems risked becoming overwhelmed with patients. More than two-thirds of the state’s intensive care units were full as of Monday, and the hospitals were preparing for a surge of 25 to 50 percent.

“We hope we do not get there,” Dr. Bessel said, adding, “We’re asking you — we’re imploring you — today to help us avoid that.”

She urged officials to adopt a statewide mask mandate and to ban indoor restaurant dining. Certain cities and counties, such as Maricopa and Pima, have full mask mandates, but Gov. Doug Ducey, a Republican, has resisted calls for a statewide order.

Nationwide, the numbers largely remained grim on Wednesday, though in the Northern Plains, cases this week were at about a quarter of their peak in mid-November, when the region was among the hardest hit in the country. There were at least 3,900 virus deaths in the United States reported on Wednesday, a day after the country hit a daily record of more than 4,400.

Earlier in the pandemic, cities bore the brunt of the virus. But now, although metropolitan areas are still suffering, rural communities are, too. Data compiled by The Times shows that deaths have spiked in less populous places, among them Butler County, Kan.; Sevier County, Tenn., and Etowah County, Ala.

“It’s taken a little while, but this highly contagious virus has now spread not only to the suburbs, but also to rural areas,” said Dr. William Schaffner, an infectious disease expert at Vanderbilt University. “In Tennessee, we have some very rural counties, and there’s no county that’s unaffected.”

The geographic diversity of the deaths makes clear that the virus has crushed the health care system in the state, Dr. Schaffner said. On Monday, nearly 90 percent of Tennessee’s intensive care units were full.

Yet it is still common in many rural areas to see people gather in large numbers, often not wearing masks. Some wind up in the hospital.

In regular circumstances, patients in rural areas who require a more sophisticated level of care — as gravely ill Covid-19 patients do — are sent to bigger hospitals in cities. But not all of those transfers are possible now. 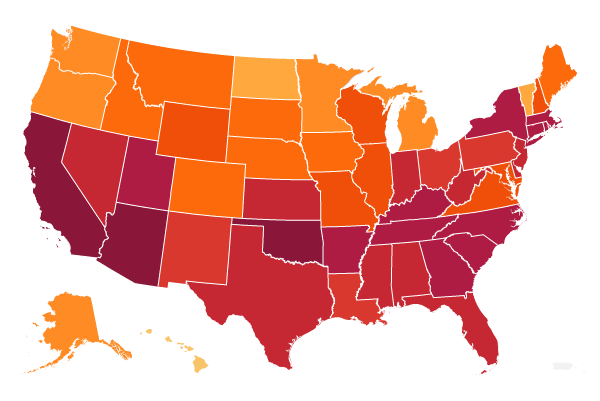 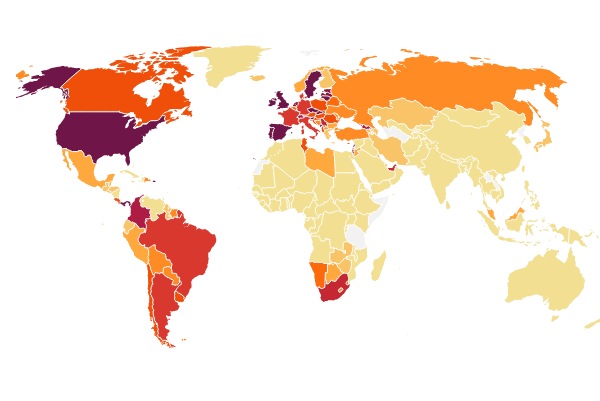 Airlines, workplaces and sports stadiums may soon require people to show their coronavirus vaccination status on their smartphones before they can enter.

A coalition of leading technology companies, health organizations and nonprofits — including Microsoft, Oracle, Salesforce, Cerner, Epic Systems and the Mayo Clinic — said on Thursday that they were developing technology standards to enable people to obtain and share their immunization records through health passport apps.

“For some period of time, most all of us are going to have to demonstrate either negative Covid-19 testing or an up-to-date vaccination status to go about the normal routines of our lives,” said Dr. Brad Perkins, the chief medical officer at the Commons Project Foundation, a nonprofit in Geneva that is a member of the vaccine credential initiative.

That will happen, Dr. Perkins added, “whether it’s getting on an airplane and going to a different country, whether it’s going to work, to school, to the grocery store, to live concerts or sporting events.”

Vaccine passport apps could fill a significant need for airlines, employers and other businesses. In the United States, the federal government has developed paper cards that remind people who receive coronavirus vaccinations of their vaccine manufacturer, batch number and date of inoculation. But there is no federal system that people can use to get easy access to their immunization records online and establish their vaccination status for work or travel.

A few airlines, including United Airlines and JetBlue, are trying Common Pass, a health passport app from the Commons Project. The app enables passengers to retrieve their virus test results from their health providers and then gives them a confirmation code that allows them to board certain international flights. The vaccination credentialing system would work similarly.

The U.S. vaccination program has been stymied by logistical hurdles as states scramble to set up new systems for booking appointments. Demand is high, but the rollout has been progressing far more slowly than hoped, marred by crashing servers, busy signals and confusion.

The federal Centers for Disease Control and Prevention said on Thursday that about 11.1 million people have received at least one dose of a Covid-19 vaccine, far short of the goal federal officials set to give at least 20 million people their first shots before the end of 2020.

At least 541,000 people in the United States have been fully vaccinated as of Jan. 12, according to a New York Times survey of all 50 states.

Suriname’s Indian-Origin President to be…

Biden Says ‘Nothing Will Get Done’ If Senate…

UK to close all travel corridors from Monday to…

Here Are The Key Moments From Biden’s Speech To…