After Day Of Chaos, Congress Certifies Joe Biden As The Election Winner

Lawmakers returned to the Capitol hours after pro-Trump mobs had stormed the building.

WASHINGTON ― Hours after protesters violently stormed the Capitol and put the building into lockdown, lawmakers returned to the House chamber and certified Democrat Joseph Robinette Biden Jr. in the early hours of Thursday morning as the winner of the Electoral College and the next president of the United States.

What is usually a perfunctory ceremony turned into the shameful, logical and tragic conclusion of years of Republican rhetoric, as a mob of angry supporters of President Donald Trump broke through numerous police barricades, roamed the Capitol halls and fought with officers. One woman was fatally shot outside the House chamber.

But hours later, lawmakers returned, undeterred by the terrorist tactics, and finished their count of the Electoral College votes.

Senate Majority Leader Mitch McConnell (R-Ky.) opened the Senate chamber back up by noting that democracy has faced threats before and overcome, and it would overcome again.

“Whether our nation has been at war or at peace, under all manner of threats, even during an ongoing armed rebellion and Civil War, the clockwork of our democracy has carried on,” McConnell said. “The United States and the United States Congress have faced down much greater threats than the unhinged crowd we saw today. We have never been deterred before, and we will not be deterred today.”

Senate Minority Leader Chuck Schumer (D-N.Y.) had a similar message, but he didn’t spare Trump from some of the blame. “This will be a stain on our country not easily washed away, the final indelible legacy of the 45th president of the United States.”

When the chaos began Wednesday afternoon, Republicans and Democrats were debating the electoral votes of Arizona ― the third state alphabetically in America. When lawmakers came back about seven hours after rioters reached the chamber doors, lawmakers were far less concerned with their performative election challenge, though some Republicans proceeded with their certification shenanigans.

As debate resumed, Republicans eased back into objecting to certification. Elise Stefanik (R-N.Y.) took a few minutes praising Capitol police before she went on to note that Democrats had objected to the certification of Republican presidents before. Mo Brooks (R-Ala.) ranted about undocumented immigrants voting, without offering any evidence that anyone who wasn’t supposed to vote had done so. And Lee Zeldin (R-N.Y.) enumerated a number of false outrages about allegations of Russian collusion with Trump’s 2016 race, Trump’s impeachment, and nonexistent voter signature challenges.

“We need to have this debate today, whether you like it or not,” Zeldin said.

But other Republicans disagreed with their GOP colleagues. Rep. Chip Roy (R-Texas), who has been outspoken against challenging the election results even before the siege Wednesday, detailed how ignoring the voters would result in Congress picking the president and noted that not signing on to this effort may be him signing his political death certificate.

But, Roy said, “history will judge this moment.”

“Let us not turn the last firewall for liberty we have remaining on its head in a fit of populous rage for political expediency,” he continued.

Despite Roy’s call, however, 121 House Republicans still voted to undo the votes in Arizona, with the House voting 121-303 for the objection and the Senate voting 6-93. After the motion failed in both chambers, the House and Senate came back together to certify the rest of the states.

Some House Republicans objected to the certification of a handful of states ― Georgia, Michigan, and Nevada ― but it wasn’t until the count came to Pennsylvania that a senator signed on to the objection. Josh Hawley (R-Mo.), the first senator to announce that he would object to the certification of the Electoral College, went ahead with his plan on Pennsylvania’s electoral votes, once again triggering debate in both chambers and a vote.

But the Senate was done with debate. It went straight into a vote, which failed this time 7-92.

In the House, debate took a bit longer. Republicans once again offered explanations for their objections that were detached from reality and lacking in any actual proof of voter fraud. They presented themselves as defenders of the Constitution as they sought to overturn the election. And they postured their objections as reluctant conclusions after a tumultuous day in which they would have loved to have moved forward as a unified chamber.

This was not a unified chamber, however. At one point during debate over the Pennsylvania votes, a fistfight nearly broke out on the floor between Rep. Andy Harris (R-Md.) and Rep. Al Lawson (D-Fla.), after Rep. Conor Lamb (D-Pa.) suggested Republicans were lying about the election. ]

“He called me a liar!” Harris shouted as members broke up the tense moment.

Members from both sides of the aisle quickly separated the men before a fight ever really started and soon, debate time had expired.

The House came back and voted 138-282 on the objection, with the GOP motion failing. About 30 minutes after Pennsylvania’s votes were certified, the last state in alphabetical order ― Wyoming ― was also certified, handing Biden the electoral victory and bringing a dark day on Capitol Hill to an end.

It was always going to be a dark day in Congress, as Republicans sought to overturn millions of votes and hand Trump the presidency as one last gasp of fealty. But no one predicted that it would be as violent and divisive as it was. 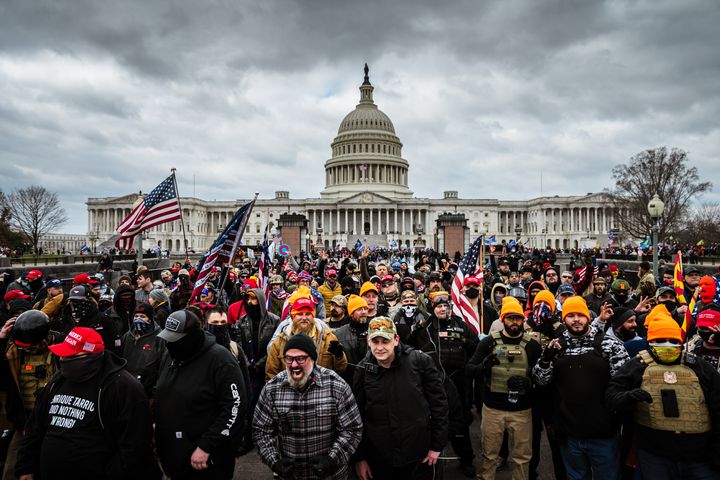 The ceremonies began inauspiciously enough on Wednesday, with Republicans defying coronavirus safety rules that House Speaker Nancy Pelosi (D-Calif.) and House Majority Leader Kevin McCarthy (R-Calif.) had agreed to months before. Under those rules, only 11 members from each party were allowed on the floor during debate. But Republicans initially sat more than 100 of their members on the floor, with Rep. Morgan Griffith (R-Va.) making a parliamentary inquiry about how Republicans were supposed to object if members weren’t allowed on the floor.

Vice President Mike Pence didn’t allow the inquiry and advised members that there was to be no debate.

But that quickly changed once lawmakers tried to certify the Arizona electoral votes. Rep. Paul Gosar (R-Ariz.) objected to the votes from the very state that sent him to Congress, and Sen. Ted Cruz (R-Texas) signed on to the objection, triggering debate in both chambers and a round of applause from his GOP colleagues.

Eventually, senators went back to their side of the Capitol to debate, and House lawmakers stayed in the chamber to argue the certification of Arizona. At each turn, Republicans applauded themselves for the courage it took to object, dressing up their nakedly political actions as somehow patriotic.

But the best argument Republicans could muster was that “some people think something is fishy.“

“Americans instinctively know there was something wrong with this election,” Rep. Jim Jordan (R-Ohio) began on Wednesday. He said Biden campaign events drew only 50 people, while Trump’s events had 50,000 people, and that there hadn’t been an investigation into the election.

(Trump’s legal team has sued dozens of times in state courts to try to overturn the election, but they’ve failed almost every time because they lack even a shred of evidence, let alone evidence of the sort of systematic fraud it would take to actually flip the election results.)

Still, Republicans continued making their arguments until the House was forced to recess because of a breach of the Capitol. Lawmakers tried to continue with the proceedings, but it eventually became clear the extent of the breach was far more serious than lawmakers initially thought.

Police rushed around the chamber and gallery, locking all the doors, and then instructed members to reach below their seats and remove a so-called “escape hood,” which serves as a sort of gas mask respirator in emergency situations.

Soon, protesters were banging on the doors to the House chamber, and police quickly started stacking desks in front of the doors. Members were rushed out of the chamber, but some hung around the House floor.

At that point, parts of a glass door into the chamber were smashed out, and police began drawing their weapons. Officers initially believed the glass was smashed through gunfire, but it later became apparent that rioters had used a hammer-like object to break the glass.

As officers stood on either side of the door with their weapons drawn, a couple of officers and a member of Congress, Markwayne Mullin (R-Okla.), tried to reason with the insurrectionists.

It was no use, and the members eventually left, though the protestors never ended up breaching the House floor. Instead, a standoff just outside the House chamber resulted in the police shooting and killing a female protestor. Three other protestors were later declared dead by the D.C. Police Department as a result of the violence in the Capitol, though it was not yet known how those protestors died.

While that commotion was going on just outside the chamber, rioters began raiding Capitol offices, including Pelosi’s ceremonial quarters, stealing items from a desk and taking pictures of themselves in a chair.

On the Senate side, protesters actually did breach the chamber. They took pictures of themselves at the presiding officer’s lectern, hanging off the ledges in the gallery and going through Senate desks that have been in the chamber for up to 200 years.

It took hours for Capitol Police to take back the building, with police letting most of the trespassers peacefully exit, satisfied that they had “stopped the vote.”

But their victory was short-lived.

Congressional leaders from both sides of the aisle and both chambers all said they wanted to go back into session and certify the results, to not be deterred by the domestic terrorists who stormed the Capitol.

Although the proceedings stretched into early Thursday morning, lawmakers prevailed over the protestors about 15 hours after proceedings began on Wednesday, certifying Biden as the president-elect and ending the first day that an enemy force had occupied the Capitol since Aug. 24, 1814.

When Does Historical Fancy Dress Become…

She Woke Up And Found Actor Danny Masterson Was…

Defense Officials Fear Inside Attack At…