Jude Bellingham impressed in England’s 5-0 win over San Marino; Jordan Henderson faces a race against time to be fit for Euro 2020;

There was very little that was remarkable about England’s routine win over San Marino on Thursday, but Jude Bellingham’s nerveless display was the latest chapter in the youngster’s steep ascent to international stardom, and could pave the way to him becoming a mainstay in his country’s midfield.

The next time Gareth Southgate announces an England squad will be for the delayed Euro 2020 tournament in two months’ time, and so highly is Bellingham regarded by the England boss that it would now be a surprise if he wasn’t included.

Southgate has been quick to elevate the Borussia Dortmund midfielder to the senior squad, and Bellingham has the class and temperament to handle the responsibilities placed upon him, whether that be in a double pivot or in a slightly more advanced position. 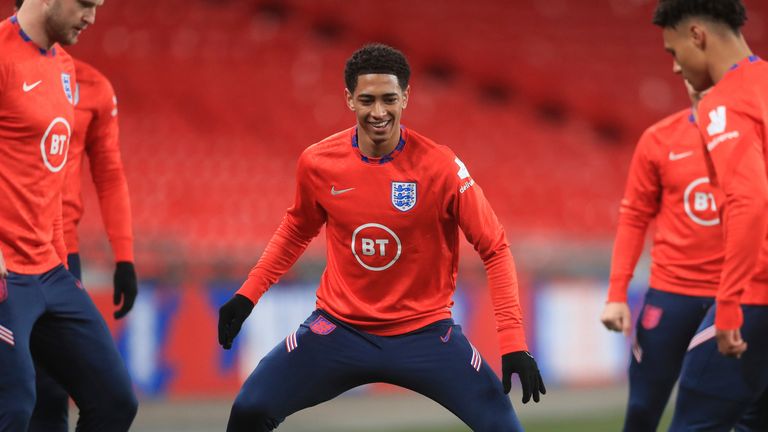 “At 17 he has nice composure, is happy to break forward, and it was a very good night’s work.”

He may have done better with an acrobatic volley, but showed his confidence in attempting the skill while his ball retention also caught the eye – completing 51 of his passes.

It is no wonder the Football Association worked tirelessly to secure a Covid-19 exemption for him to join this month’s international camp, and Southgate will not hesitate in calling upon him for England’s next qualifier against Albania on Sunday.

“He’s a player we think is going to be an England international in the future,” he said.

“We feel that in that area of the pitch, although we were very happy with everybody tonight, we are a little bit short in numbers.

“For us to help develop him, to put him into games and to try to get him with the team, with the development he is getting at Dortmund as well, we’re hoping we can play a part in fast-tracking him into the group.”

Southgate has previously admitted the senior members of his England side that reached the World Cup semi-finals in Russia may have disbanded prematurely – Jesse Lingard’s return to the fold indicates how the door has never been fully closed – but an abiding feature of his reign has been an unwavering faith in youth.

Celebrate in the UK with these 5 fun travel…

Democrats Are Slowly Getting More Critical Of…